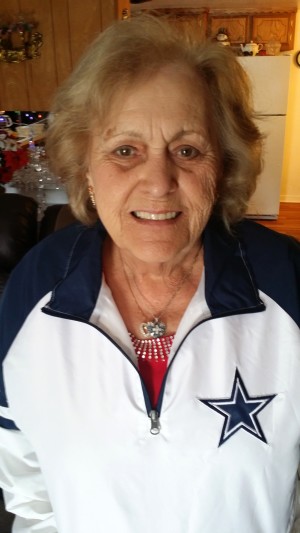 She was born to Eva Bell Ford Thearl and Thomas Jefferson Thearl on December 8, 1938, in Wright City, Oklahoma. On February 25, 1956, she married her one and only love, James A. Roberts, Sr.. After spending their first few years in Oklahoma, they relocated to Houston in 1962 where they settled to raise their family. Pat spent several years at home raising her sons until they reached school age. At that time, she began working for Galena Park Independent School District where she remained until her retirement in 1987.

Pat was a loving and devoted wife, mother, grandmother, sister, auntie, and friend. She was an excellent cook and always made certain that no one left her table hungry. Pat was also an avid Dallas Cowboys fan who never missed a game or the chance to rib her son, J R., about his Texans' team. She loved listening to Elvis's music, posting on Facebook, and playing cards with friends, but her greatest joy in life was spending time with family. Patsy was, truly, one of a kind. She had a wonderfully sassy wit and was always prepared with a snappy comeback, but it is her generous, loving heart that will be most remembered. She loved greatly and was, in turn, loved by many. She will be missed.

Patsy is survived by her sons: James A. Roberts, Jr., Paul Wayne Roberts, and her stepson, James Nelson Roberts. She is also survived by her grandchildren: Megan Roberts, Michael Roberts, and Sarah Roberts. Additionally, she leaves behind her brother, Bill Thearl and wife, Wanda, as well as numerous nieces, nephews, and other cherished family members. Patsy was predeceased by her parents, her loving husband of 62 years, James A. Roberts, Sr., and her precious grandson, James Ryan Roberts. She was also predeceased by her beloved sisters, Mattie Thearl  Rhymer, Gladys Thearl Blackwell, and Katherine Thearl Dodderer; and her brother, David Thearl.

Patsy will be laid to rest at Sterling-White Cemetery in a private graveside service. In lieu of flowers, the family requests donations be made to the American Cancer Society or any group helping in the fight against cancer.

To send flowers to the family or plant a tree in memory of Patsy Ann Roberts, please visit our floral store.